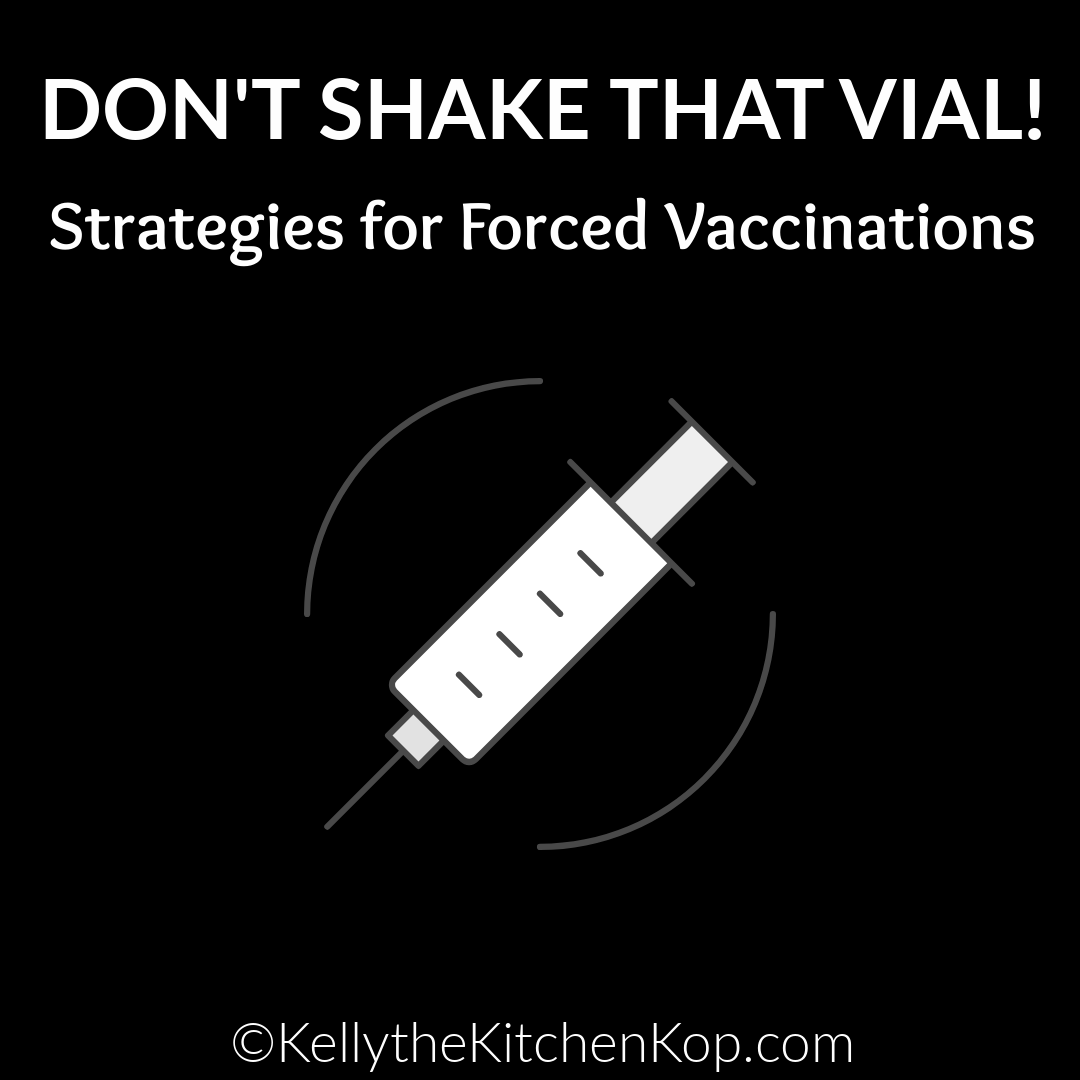 Today you'll learn about a strategy for forced vaccinations, because we all may need this information someday.

Do you guys remember Mandy?  She's the Mom who wrote this heart-wrenching guest post here a while back:  Healing Kids with Real Food: Our Story of Fostering Children, Cancer, and Adoption.  And here's her post from today:  What to know when vaccinating!

At the Weston Price/Wise Traditions conference in Montgomery, Alabama last month she and I reconnected, as we do each year.  🙂  We first bumped into each other when we were listening to the Q&A session with Del Bigtree, producer of Vaxxed, after the movie was shown.  I was sitting sort of behind her and she seemed to be fretting a bit.  I don't remember our exact words, but she said something like, “I feel like I need to say something…”  I told her, “GO do it!”

So she stepped up to the mic and the video below is what happened — she ended up sharing her strategy for forced vaccinations.

But the audio isn't real clear, so I wanted to share the transcript with you today…  (Scroll down to watch it too if you'd like.)

First of all, I’m Mandy. I want to say thank you for the courage; for what you guys do, really genuinely! The side effect is, I work with foster kids, and there's 400,000 in the U.S. and 10 million in the world and these kids have to take [what’s widely accepted]. We worry about our own kids, with a Mom and Dad, but I’m representing the kids that don’t have a mom and dad and they have to do what is widely accepted. So, when we (societal medical community) make [accept] these decisions, we have to consider these kids.

So we have got to make this change. I’m appealing to people to have courage and quit living in fear because we have to make the change for our kids that don’t have a mom and dad, and so I stand with Hilary [her earlier comment] and programs like Vaxxed that are educational, and Documenting Hope, which is a program that will show 14 kids over 18 months recovering, and the goal is to show how you can do this naturally. How you can do it [recover] without injecting with thimerosal, how you can do it without doing things that are typically done today/widely accepted today.

And one of the tricks that I want to share with everybody here today that I learned after fostering and being mandated to vaccinate is:

Don’t shake that vial (with single dose vials).  If you have to vaccinate a kid, do not shake the vial, I have many medical friends, and it’s said, “you do not shake that vial” because metal settles…..You pull it from the very top and you have a much better chance of not having an adverse reaction, because with foster kids you have to be very creative.  (Note from Kelly:  Beg the nurse if you have to, ask her not to shake or flip the vial and to draw carefully from the top.  ***See the note on this below.)

So I’m asking people to be courageous along with you, this affects a lot of people: you’re talking foster systems, you’re talking prisons, you’re talking assisted living, people that are wards of the state. It’s critical that we do this [have open discussion and change our current program], not for the “choosing” and the people that can be creative but for the kids and the adults and seniors who cannot be creative, so thank you very much.

Thank you for the work you’re doing…

I think one of the scary things we're hearing now is the amount of parents… you have to understand, for those that don't know, we're going around the country in a bus that says Vaxxed and people are signing names of their injured children on the side.  It was a black bus when it started and it's now silver from all the ink written all over it, I think we're nearing 5000 signatures with vaccine injured stories.  Polly's interviewing, it's getting crazy with live videos of vaccine injuries and it's pissing off the pharmaceutical industry.  Because it's easy for us to write off 1 in 68 or 1 in 45 because we don't see their faces, it's not real, and Polly is really doing an amazing work showing this.  I want to be careful that it can seem really diabolical and intimidating, yes the pharmaceutical industry has the biggest amount of money, but we've been here before throughout history, there are moments where life gets too big and falls, and where the collective unconsciousness or God or whatever it is that drives you and brings people together makes a difference.  I just finished reading Thomas Jefferson's biography on the plane, you think about that moment of the Founding Fathers staring into the face of the most powerful military force the world had ever seen, and thinking we either fight now or we'll never have the freedom to (inaudible) and I think this is one of those moments.  I think this is one of those moments where we have all been called to groups like this, we've got to stand together now, we cannot keep in fear of how big this thing is, because I'll tell you this, it's not big enough.  As I travel this country, the nation is on our side.  In gas stations, in grocery stores, we talk about it all the time, what is this about, and we tell them the whistleblower from the CDC, they know vaccines are causing autism.  98% of the time, do you know what the response is?  “That figures, they're lying about that too.”  That's the nation we live in, that's why Donald Trump just won and that's why WE are going to win.  We have got to stand together, be vocal, and stick to the facts.  Have fun with it, when you're talking to your friends, they're being difficult, don't be afraid to lose them, just say, alright, that didn't work today, let's try another approach, that's all I've been doing for six months and getting really good at it.  Getting really good at talking to senators and congressman, alright, I blew that one, let's try another approach. Find the approach, it's out there.  Almost everyone I talk to now, I don't think I'm leaving rooms without at least having them sitting there shaking and saying, “Wow, so many facts… I guess I have to think about that, it's possible.”  We're shifting this, it is changing, it is moving, it is our time, we the people of the United States, we the healthy practitioners, we the ones fighting for healthy foods, clean water, this is our nation, this is our time, we are going to be remembered in history, because we fought for freedom once again.  That's what this is about, this is a freedom issue, do we live in the United States of America or do we live in the United States of the Corporations, that is what is at stake now, please stand together, make a difference and know that we are powerful, our bodies are sovereign and we are going to change this world.  Thank you all.

***Before you check out the videos below, I need to make an important note about Mandy's suggestion and the metals in the vial:

Hopefully these vaccines are in single dose vials, so by asking the nurse to only take some off the top and not shaking the vial, you're not making a more toxic dose for the next person.  If not then Mandy and I both would be uncomfortable doing it, but an idea I'd surely try is this:  after they give the shot, then get the nurse to toss that vial and explain why.

Don't blindly follow me or anyone though, research it for yourself!  Read more about our vaccine decisions here and don't miss this post:  What you MUST do before forced vaccinations and the other related posts below! 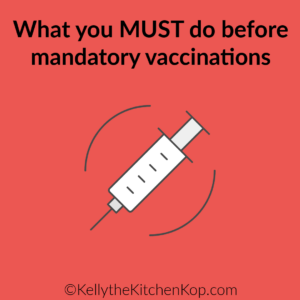 Mandy's cookbook includes recipes that are gluten-free and casein-free. Many are GAPS friendly. They are all very simple to prepare and kid approved!  Click here to check it out.  🙂 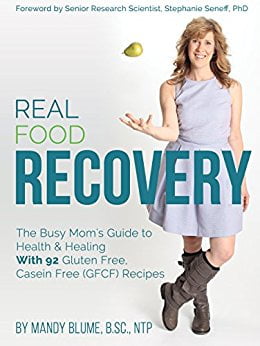 Now watch the video of Mandy's comment to Del Bigtree at the WAPF conference in Montgomery Alabama:

Del Bigtree's podcast at the WAPF:

In case you missed it, here's my podcast at the WAPF conference: