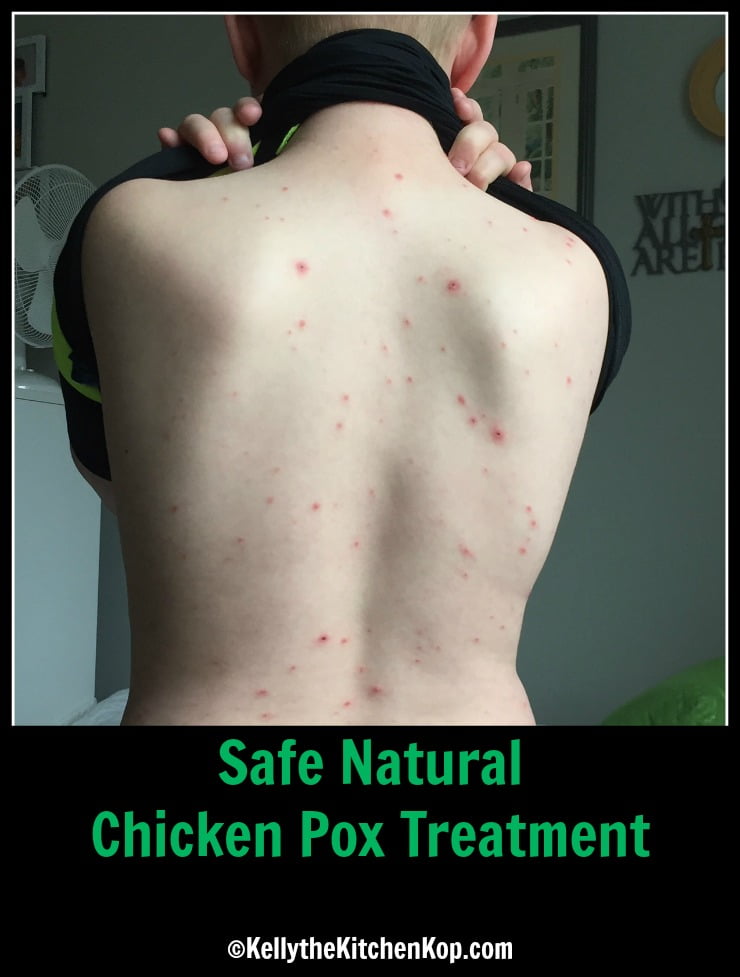 Today I'll share what I learned about safe, natural chicken pox treatment because our youngest son got it recently and I was so happy!  Yes, that probably sounds a little odd, but I'm used to being that Mom, and I'm guessing many of you are too. 🙂

The thing is, many years ago when I was deep into the research on whether or not to have him vaccinated, and which shots we should let him get, etc., Varicella was one that we chose NOT to do, hoping instead that he'd contract it naturally.  We waited and waited, and he was almost 13 and it wasn't happening…  (I even wrote a post about it:  When you can't catch chicken pox.)  Until this past spring when he went to hang out with a friend who had it, along with his siblings, and then YES!

You know what? It was SO not a big deal you guys.

Does that mean that nobody ever has a bad case?  Of course not.  There are always extreme cases with anything, but below are a bunch of options for safe natural chicken pox treatment depending on the symptoms and severity.

I love knowing that he got a harmless (usually) childhood disease, his body fought it off naturally, and now his immune system is stronger.  Hopefully this exposure will also boost the immunity for those in our family who already have had chicken pox, or for those who were vaccinated, and maybe even prevent shingles later?  (Too bad he didn't get it before I got shingles the year prior, if he did I probably wouldn't have gotten it!)  The question is what will happen with our kids who had the vaccine many years ago before I knew what I know now.  That's one of the reasons I'm so uncomfortable with vaccinating nowadays, no one really knows what will happen down the road.                (Later:  they didn't get it and were happy about that, obviously!)

Here's how I helped Kasey with his symptoms:  Safe Natural Chicken Pox Treatment

My goal was to minimize itching (not only for comfort, but to prevent any scarring) and to handle any other symptoms as they came up…

Note:  I wouldn't have known what I was doing on my own — thankfully I recently took Joette's homeopathy class with Sheena who has helped me so much!  (Read more about my discovery of homeopathy:  My World is ROCKED)  Between her, the knowledgeable people on her Facebook page, my local friend, Jen, and all of the reference/resource books I've purchased, I was able to trudge through this and help our son so his symptoms were really no big deal.

By the way, soon I may help to lead Joette's study class myself (online via Zoom) with another friend who has much more experience than I do.  If you want to join us, email me with the subject line STUDY GROUP and I'll put you on my list:  [email protected]  (We will definitely have to limit how many, so I'll keep the list in order of when I receive the emails.)

You might ask your child with chicken pox symptoms (sore throat, itching, etc.) how bad they are on a scale of 1-10 before starting the homeopathic remedies, so you have a gauge to know if it's better later.  (10 means almost dying, 1 is just a little annoying.)  If it's not better, you may need to switch remedies, but I didn't do this with Kasey because I can read him like a book.  🙂

It was interesting how other parents reacted…

Some who have kids with sensitive immune systems (they've been sick a lot) chose not to let Kasey play with them, which as a Mom, I totally understand, but I do wonder if their immune systems are sensitive because they haven't been exposed to enough that they had to fight off and then become stronger.  These kids are vaccinated fully according the their doctor's recommendations, which is also ironic, because I noticed that no one trusts these vaccines to work…  So why are so many blindly following the docs and vaccinating at all?!  (Yes, it's supposedly to lessen the severity?  But at what cost?  And through the years they've changed around what was “required” anyway, first one Varivax shot, then it became TWO, it's clear that they don't know what they're doing.  Here's how I learned that firsthand.)

Other's asked, “Can my kid come play with him and share a cup?!”

Other parents knew how important it is for the immune system to get the disease naturally — I was glad when Kasey got a good case so I knew he'd have a nice strong natural immunity and that we didn't miss out on this great way to flex his immune system’s muscles!

Many expressed a worry about their kids getting it because they know someone who had some scarring on their face after getting chicken pox.

But if you know about the remedies I mentioned above to help with that or other symptoms, then you can rest easier.  Does that mean complications will never happen?  Of course not, but it lowers the risk considerably, and anyway there are risks with everything — you always have to weigh risks in life.  I believe that the 100% chance of all the health benefits that come with natural immunity outweigh the small risk of scarring or other chicken pox complications.

But you know what is NOT rare at ALL anymore?

Kids with cancer or autism, or adults with autoimmune diseases, sadly this is becoming so common.  🙁  We don't know for sure of course, but doesn’t it make sense that the increase in these diseases and others could be affected by something that messes with the immune system response as much as vaccines do?  Or by NOT getting the inconvenient childhood diseases now that we all got as kids like mumps or chicken pox, which strengthened our immune system as we fought it off?  Do we know any of this for sure?  Of course not, and that's the way Big Pharma likes it.  There are too many variables and we obviously don't know all the causes of illness.  I'm only saying that this very well could be a factor, and it makes you think.  It's something I wish I'd thought of myself so many years ago — how I wish I knew then what I know now for all of our kids' sake!

We can DO this!

Just like Joette says, this is what it's like to be that Mama Bear who can handle it when your child gets sick and you take care of it yourself.  No need to run to the doctor for nasty chemical creams or drugs that cause much more harm than good.  We can do this Moms!

Posts like this take a lot of time so I have one favor to ask….  If you are shopping on Amazon, I'd appreciate you doing so through this link or if you are shopping for other items doing so through the links on my shop page — there's no cost difference for you, it just helps support the blog so I can keep going, and thank you!  You might also buy my book: Real Food for Rookies! 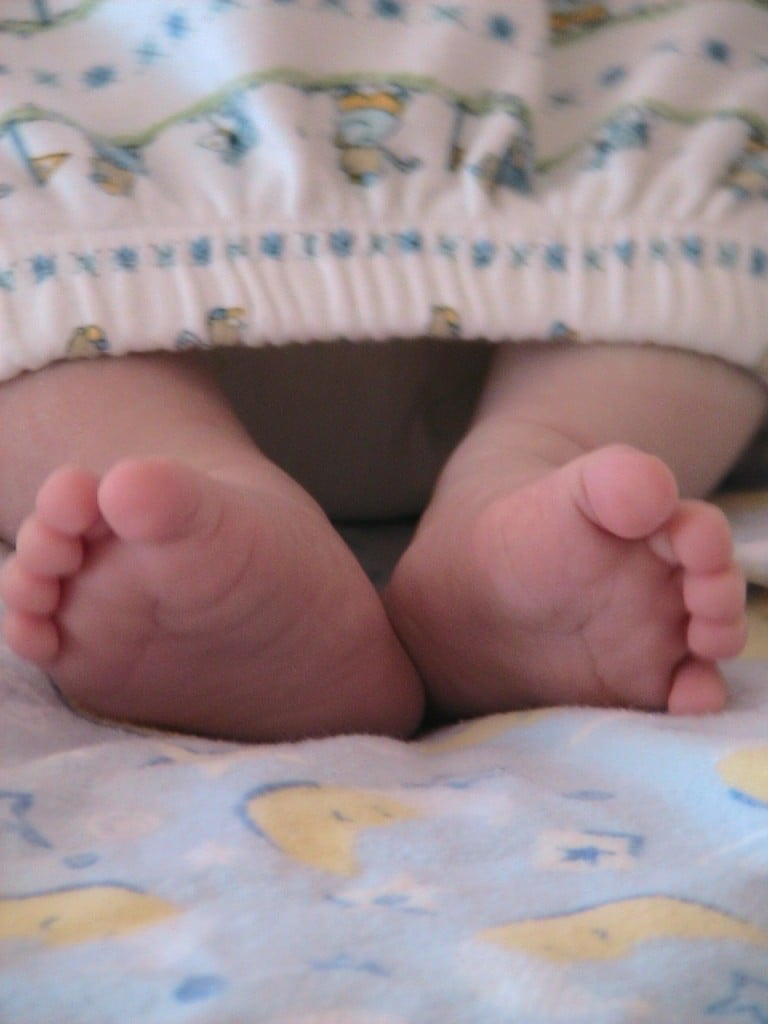 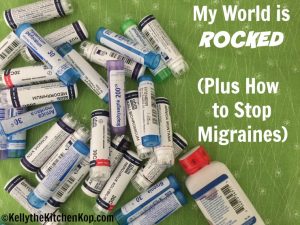