Today's post is written by a guest author, and nope, it's not April first, but the title kind of feels like it, right? Well, I promised you politically incorrect info around here didn't I?! Actually, keep reading, and then you'll understand…

Never thought you'd read that here did you?!

Although you'll never find me lighting up – that disgusto smell and yellow teeth, no thank you!  However, I do now have more understanding about exactly why it's so hard to stop once you start:

Just as indigenous cultures for thousands of years have described tobacco as “sacred medicine,” turns out there are some nicotine benefits because it has powerful healing properties.

This new perspective for me started from researching gluten intolerance around 2012. I was startled to find a study in which nicotine demonstrated anti-inflammatory properties on the gut: Nicotine treatments for ulcerative colitis.

The light bulb appeared and proceeded to smash itself over my head as I remembered the final years of my mother's life.

She was a smoker since age twelve, and then in her mid-70's my mom had had a lung collapse. Her extended stay in the hospital had forced her to do what her kids had been begging and bullying her to do for years – end her 60+ year cigarette addiction.

“What a good thing!”, all of us (non-smoking) children said to one another, nodding our heads. Except that almost as soon as my mother arrived home from rehab, her lifelong bowel issues (also known as Leaky Gut) exploded into an emergency – spontaneous bleeding from the rectum!

No one, including her doctor, ever thought the two changes – quitting smoking and a bleeding gut – were related.

Given her history, none of us kids were surprised when my mom passed away of a particularly virulent, fast-acting form of lung cancer, ironically less than two years after quitting cigarettes.  Too little, too late, we all said.

Unquestionably, all those decades of inhaling nasty chemical-laden cigarette smoke blackened and weakened my mother's bronchi, predisposing her to lung cancer. What's debatable in my mind now, though, is whether or not the nicotine in that smoke did any damage at all.

My mom had undiagnosed Leaky Gut her entire life and I believe the intensity of her addiction to smoking grew out of the reality that nicotine helped keep her inflammatory bowel problems in check. Without nicotine in her system, her bowel disease would explode.  (Yes, I was shocked to find out there were nicotine benefits!)

In fact, I came to wonder if Mom might have had a few more years of life if she had been able to continue her nicotine intake without the negative effects of inhaling smoke into her lungs.

Or, more ideally, if her doctor had been able to help her correct her inflammatory bowel disease by reducing the pathological overgrowth in her gut by prescribing a specific probiotic that I'm just now learning more about:  a gut commensal spore probiotic.  (More about that below.)  That way over time she could have possibly eliminated her need for nicotine altogether.

These long time questions in my mind were reawakened by recent comments from a friend:

Amazing that you say this about nicotine benefits, because over the years, I have known men who smoked for 40 years, but quit, and within a few months, they died of cancer.

In fact, I did a remodel for a 92 yr old man who smoked 2 packs a day his whole life. When we started the remodel, his doctor had just ordered him to quit smoking. He was beside himself and I talked him into smoking again, because at 92, I didn't feel like he would benefit from the stress and trauma from quitting. He started smoking again, and lived another six years. (Emphasis mine)

I also have come to believe my mother's condition – undiagnosed Leaky Gut – is actually quite common.

Don't believe me? When Just Thrive (the spore probiotic mentioned above) conducted their Leaky Gut study in 2016, fully ONE HALF of the participants ALREADY had undiagnosed Leaky Gut before they even started the study. Blood tests don't lie.

And the average age of these participants? Teens and early 20's!  College kids, presumably at the peak of their health who, nevertheless, already had a bodily inflammatory load that is abnormally high due to toxins produced by gut microbiome pathogens.

So if this represents the gut health of our youth, what can we assume about our seniors, like my 70-something mother?

More than a decade after my mother’s death, I am struck by the enormous documented similarities between the anti-inflammatory nicotine benefits and those of the spore bacteria strains in Just Thrive that I've written about here before.

Both nicotine and this probiotic have been shown to:

My mother tried to quit many times over the years and what always drove her back to smoking was feeling crabby, depressed and physically fatigued, while also gaining weight.

I always assumed Mom put on the pounds because she was eating more sweets, but maybe that wasn't the case.

Perhaps her body just simply “blew up” in response to having a higher inflammatory load once her nicotine intake was lowered, and the crabbiness was related to her blood sugar swinging all over the place from the worsening of her insulin resistance.

To us kids, the great irony was that my mother, the much heavier drinker of the two, lived years longer and “smarter” than my father.

At the suggestion of his doctor, my father had given up smoking when I was a child. Nevertheless, he died almost a full decade before my mother, succumbing slowly and bitterly to a series of disabling mini-strokes and dementia.

Now, it seems that nicotine benefits also include protection against cognitive impairment, memory loss and other neurological brain conditions, including Parkinson's disease and (wait for it…) dementia.

Could it be that these protective factors are largely due to nicotine's ability, like the spore bacteria strains in Just Thrive, to heal Leaky Gut? A pro-inflammatory state is highly associated with frailty, including an increased risk for inflammatory brain conditions like the dementia my dad died from.

Which one is more natural?

However, while both have anti-inflammatory effects, it appears that the nicotine benefits are, at best, only a temporary solution (why doctors describe it as “addictive”), while the strains in Just Thrive are both natural and necessary to human health.

We are designed by nature to be consuming these spore bacteria daily because these specific strains reduce inflammatory endotoxins in the gut by killing the pathological microbes that produce them.

Perhaps a lack of these “gut cleaners” in our diet and gut microbiome is the primary reason behind having a high level of toxins and inflammation in our bodies, thus setting the stage for the “need” to use nicotine to counteract the effects.

Ever get the desire to light up just after a meal?

Was it oh say, pasta or pizza washed down with a beer or glass of wine? My guess? You're having an allergic response to your food.

Pasteurized dairy and gluten, as well as fast food in general, and alcohol all tend to irritate and inflame, starting with the gut wall. You crave the nicotine to help deal with the inflammatory responses your body is having in reaction to the meal.

However, there is a way out of this mess… The right way to quit smoking:

Whenever someone asks me for help getting off cigarettes, my first recommendation is always to make no big changes initially!

The beginning step is ALWAYS to start healing the gut wall FIRST in order to reduce the amount of endotoxins in the blood. This one step will not only make you feel better overall, but should also reduce cravings once you begin to lower your nicotine intake.

Reduce your intake of inflammatory chemicals:

Reduce the inflammatory foods and increase the gut-healing ones:

Am I condoning smoking cigarettes if you use organic?

Smoking makes your breath smell revolting, yellows your teeth, is expensive, physically damaging, incredibly hard to stop and fundamentally a cover-up (smoke screen, if you will) for what you really need to be doing – getting on a decent, immune-system-building, real food diet that matches your metabolic needs and taking the right probiotics.

Personally I've never smoked, thank God. But I will admit to now feeling embarrassed about my past sneering attitude towards friends and family who were struggling to quit. I'd think, “Just quit, it's obviously killing you!”

Well, turns out it, it’s killing you AND helping you! Ain’t life a…?!

Parents – you also might consider putting your children on the Just Thrive probiotic to be potentially both protective and preventive against the possibility they may be tempted to take up smoking as they get older.

Hopefully, if a child gets no “high” from trying out nicotine that first time, there will be no incentive to continue.

More on the Leaky Gut Study

Just Thrive is the only probiotic company to have a published, peer reviewed human clinical study showing that – at one cap daily in 30 days, with no other changes in diet or lifestyle – the licensed gut commensal spore bacillus strains in Just Thrive:

The above is excerpted from the Leaky Gut Study Summary by Kiran Krishnan, research microbiologist. For a hard copy of the Summary, ask Kelly and she can get in touch with me.

For more information on the documented benefits of gut commensal spore strains, see Can Leaky Gut be Healed?

Have you ever made a similar connection between smoking or chewing tobacco and possible anti-inflammatory nicotine benefits?

And remember you can get 10% off the Just Thrive probiotic with the code KOP. 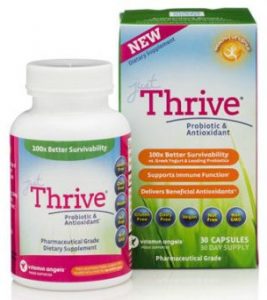