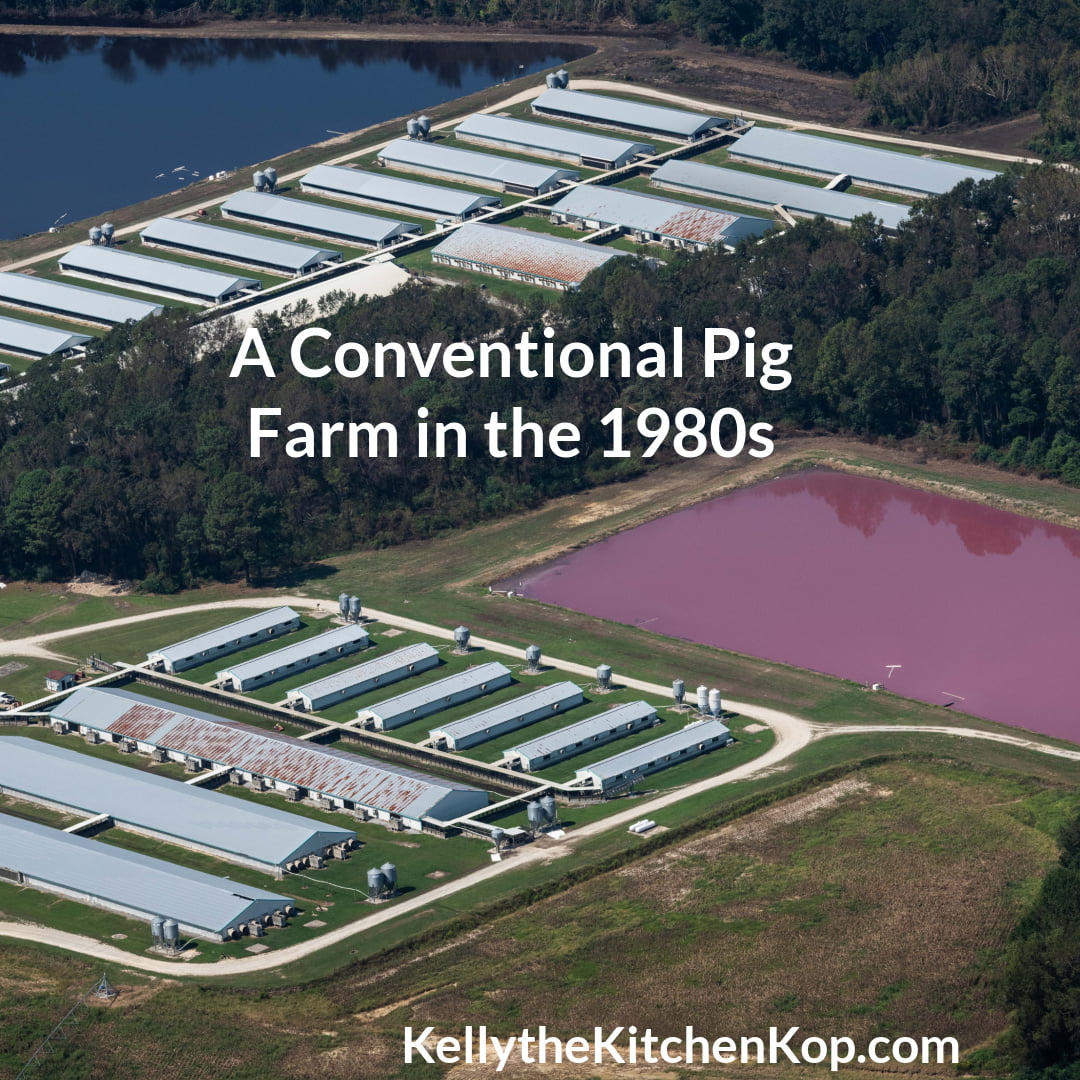 A story about a conventional pig farm in the 1980s

Kent and I grew up in a small farming town in the middle of Michigan, about an hour and a half from where we now live by Grand Rapids.  When we were there recently, we drove by a stinky factory farm on the way home.  This led to the discussion of whether or not factory farms smell worse than a farm where animals are raised more naturally.

According to Joel Salatin they do.  He says, “Good food production should be aesthetically, aromatically, and sensually romantic!”

Kent grew up on a farm and the other day I started asking him some questions that I don’t remember asking before, which is perplexing since I’ve been digging into the whole real food world for a while now.  He was telling me that his family raised animals for milk and meat, and he remembers that nothing got wasted because anything that didn’t get eaten at their table went to the pigs.  Their cows, pigs, rabbits, ducks, and chickens all roamed free out on their land.  Kent’s Dad also worked another full time job, and they got to the point where they either had to dump a lot of money into the farm and get bigger (and become more of a factory operation), or just get out, so that’s when they stopped farming in the late 70’s.  They still knew people who farmed, so Kent always had farming jobs, and he told me more about a certain pig farm he worked at…

Where was common sense?

He said the pigs were in a barn on a cement slab all day every day, and they were given something in their feed so they’d have only liquid stools.  This made the waste easier to deal with because it went right into a big tank, and then was pumped out into a ‘honey wagon’ and spread on the fields.  I was surprised that this type of farming began almost 30 years ago, probably longer.  Sadly, Kent’s Dad now has Alzheimers, but I wish I could ask him, “Did anyone wonder if this kind of farming was wise, to make the animals have constant diarrhea and keep them inside on cement all of the time?  And if it’s not a good (or humane) way to raise animals, how could it not also affect the nutrition and safety of the meat?”  I asked Kent if he remembers anyone ever questioning some of these farming practices.  He said that farmers were told this was how to turn a decent profit at farming.  When I asked his Mom she said, “I think many felt pressured to do things that way in order to make a living.”

Kate from the Modern Alternative Mama blog interviewed her local farmer, who lived both sides of this issue:  Confinement farming and returning to natural methods.  Here's an excerpt:

“When graduating from high school, I studied agriculture in college and wanted to farm when I completed my college.  During these years we had some sows and finished their pigs as a means of getting a better price for the grain raised on the farm.  This was the time (mid-70's ) when confinement of hogs began entering the picture, chicken confinement had been around for one or two decades, and some sections of that business were making large amounts of money. Wanting to farm and not having access to much acreage, my two older brothers and I slowly entered the hog confinement business.  Confinement of livestock allows you to raise many more units with minimal profits per unit, and as with all business, the more units you produce the more you profit when the costs are controlled.  This is where the big changes began taking place.  Feed became an area where the most savings could be made and all sorts of feed substitutes and additives were being used.  Historically our livestock became the dumping grounds of byproducts, anything with some nutrient value was considered a feed.

Question#2: What was that like?  How were the animals treated?  What did they eat?  Where did you get the food?  Where do many farmers get the food?

Being young and right out of college and excited about being in business for myself, I pretty much sucked in the knowledge offered about the confinement industry as being credible.  Animals were put in buildings with cement partitioned floors which allowed the manure to pass through and into a holding pit.  Space per animal was limited; the more animals you could cram into a small space, the more efficient you supposedly were.

Our feeds consisted of corn and soybeans grown on the farm and a vitamin and mineral pack which was purchased.  This remained the feed source for as long as I was in the business on our farm, although this was not the norm the industry heeded (as was mentioned about the use of many byproducts).  Today there are many brokerage firms offering every imaginable byproduct, which are highly accepted.  To name a few, ethanol byproducts, stale or improperly made/outdated and improperly handled foods (gum, cookies, chips, cakes, flours, candies, animal byproducts, breads etc.) are all used to cheapen or reduce feed costs.  An interesting fact to the feeding situation is that feeding alfalfa hay to hogs greatly improves health and performance (a practice that was widely used before confinement) and was totally ignored because of the problems made by the wasted hay that entered the manure holding pit, causing problems with manure handling. Many things that were proven good for the pigs but not convenient for the farmer were forgotten by confinement systems.  Feeds previously being made on the farms changed over to being made and delivered to the farm by large feed milling plants who had access to the large quantities of byproducts and grains.”

Read the rest of this very interesting article:  Confinement farming and returning to natural methods.

This type of meat can and does make people sick!

The food is becoming much more dangerous, in ways that are being deliberately hidden from us.”  Michael Pollan

This is why we do not eat conventional meat or drink conventional milk, and why we are willing to pay more for these foods from a farmer we trust, while being more careful with our food budget in other ways.

Do you have any experience with farms in the 70's or 80's?  I'd love to hear your experience or what you think about all this…

Have you seen these?