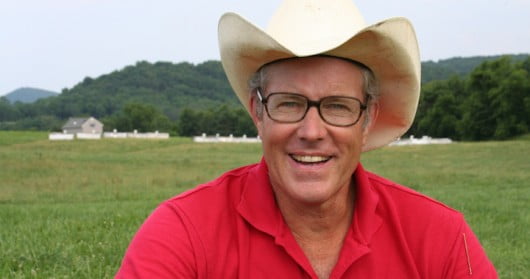 One of the many reasons I love Joel Salatin is because he's not only “THE” real food rock star of our time, but he's also a Christian.  As this movement has grown, don't you love how it brings crunchy liberals and conservative Christians like myself to the same table?  (I'm not necessarily talking about politics, by the way.)  No matter who you are or what your beliefs may be, all real foodies agree that what we put into our bodies matters, and I'm blessed to have many friends with varying backgrounds and ideas.  Life is so much more fun that way, don't you think?  I'm proud now to say that I'm pretty darn crunchy these days, too.  🙂

So the other day I came across an article on Joel Salatin that brought up a lot of questions I've always wanted to ask him, here are a few of them:

—We have a lot of cooks in the farming kitchen in this country: the farmers, the government, and even Wall Street and big business.  To that end:   What would be your perfect Farm Bill?

Joel Salatin:  Eliminate the USDA. (The “US-DUH” as he calls it!) Started by Abraham Lincoln to help farmers be successful, no government organization has ever so effectively destroyed its constituency. We now have twice as many prisoners as we have farmers. Every time the federal government manipulates a marketplace, it favors the largest players, subsidizes the status quo, and discourages innovation. I can think of no role whatsoever for the government to play in farming. From crop insurance to environmental protections, the result has been MRSA, cDiff, increasing pharmaceutical and chemical dependency, genetically modified organisms, increasing food allergies and a nation that leads the world in the five chronic non-infectious diseases. The USDA told us to eat margarine. It told us to eat hydrogenated oils. The famous food pyramid founded on carbohydrates like Twinkies and Pop Tarts directly accelerated the obesity and Type II diabetes epidemic. Indeed, we would be a far healthier nation had the government never told us what to eat.

The USDA food police tell us it’s perfectly safe to feed your children Coca Cola, Cheerios, and pink slime, but it’s unsafe to drink raw milk, eat compost-grown tomatoes or imbibe Aunt Matilda’s home-made pickles. When the government gets between my lips and my throat, I consider that an invasion of privacy. Official orthodoxy equates sterile food with safe food, and yet our biology is not sterile. Research into tomatoes does not seek more nutrition or taste—it seeks harder orbs to withstand jostling for 2,000 miles in a tractor trailer. Hence, tasteless, nutritionless, cardboard tomatoes. I can think of nothing positive that the USDA has done that wouldn’t occur better in the private sector, and I can think of many terrible atrocities and abuses we’re currently suffering that would be less severe had the USDA not aided and abetted stewardship abuse. Yes, it is time to be angry about this.

More excerpts that I loved:

—How can we, as eaters, consumers, and Christians, reflect our faith in what we eat?

Joel Salatin:  Is it healing or sickening? Is it neighbor friendly? Jesus says to love your neighbor, and yet industrial farming assaults neighbors with polluted water, stinky air, and nutrient-adulterated or deficient food. The empirical nutrient difference between a factory-farmed egg and a pastured egg is different enough to prove it’s not even the same product.

Click over to read the full article for more good stuff, including answers to these questions:

—Is systemic change possible for our food systems, and, if so, how can Christians help lead the charge for that change?

—How can those of us in urban areas, and especially those who are low-income, eat as close as possible to how you would on your farm?