Back before I knew how terrible industrial vegetable oils are for our health (soybean oil, corn oil, canola oil, safflower oil, etc.), I used to love ordering fried mozzarella cheese sticks at restaurants.  Once I learned how healthy certain fats are for frying in (like beef tallow or lard from pastured animals), I wanted to try making them, but figuring out a breading that would taste good and that wouldn't fall off as soon as it hit the grease proved to be tricky.  THEN I got the idea to try wrapping them in wonton wrappers (or actually I probably saw it somewhere).  Of course I first had to check the ingredient labels on those, and you know what?  They're not terrible.  Now keep in mind, that doesn't mean the label was all sparkly, but at least it had only a few ingredients and no preservatives, and it was all things I recognized:  Flour, Water, Salt, Wheat Gluten, Vinegar, Eggs, Egg Whites, Cornstarch.  If even that turns you off (and if you're a strict real foodie, it might), you can try making wonton wrappers yourself, just search online for a recipe.  This isn't something we make very often, though, so I'm okay with it. They turned out really REALLY tasty, and the kids went wild over them.  Kent said they were better than any he's ever had in a restaurant.  They crisp up so nicely and are delicious dipped into your favorite organic marinara sauce!

I usually keep two deep fryers going so I can make them faster, and having a helper to wrap them up with me is handy, too.  🙂  We don't fry all that often because it sort of makes a greasy cloud in the air that we then need to air out of the house, so when I do make these, I'll sometimes also make other favorite fried foods at the same time.  Things like homemade fast-food French fries or beer battered onion rings, shrimp, or fish! 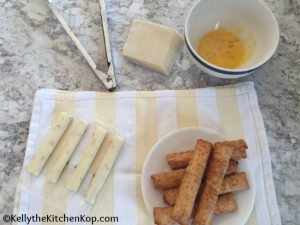 Heat up the fat in your fryers.

Using a fork or small whisk, beat one egg in a bowl.

If your cheese sticks aren't frozen, or if you remember to cut the cheese sticks in half before you freeze them, you could use one wonton wrapper for each piece of cheese, which is easier.  Otherwise, just overlap the wrappers as shown in the pictures below and use two for each cheese stick.  Only get out a few cheese sticks at a time so they stay frozen until you get them wrapped and fried.  Use a finger dipped into the egg wash to moisten the seams and corners and wrap the cheese up as shown, tucking in the ends first and using a lot of the egg to keep the corners very moist, which prevents tears and keeps the folds closed.

When the grease is at 350*, carefully drop in the cheese sticks, only 2-3 at the time so they crisp up and don't cool down the grease too quickly.  Cold grease makes soggy food.  If you don't have a temperature adjustment on your fryer, you might want a thermometer like this one to make sure the fat doesn't reach the smoke point.  Heating fat past the smoke point turns a healthy fat into a not good for you fat!  Having a fryer like this one with a good temperature control makes it all easier. 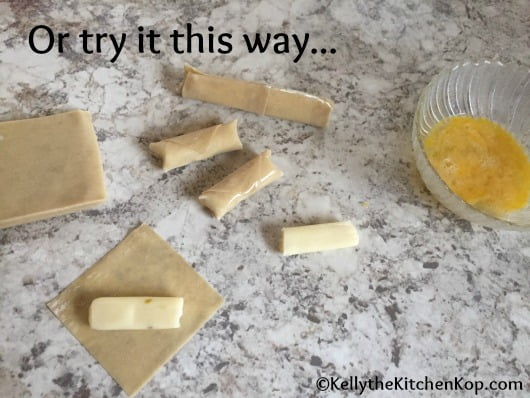 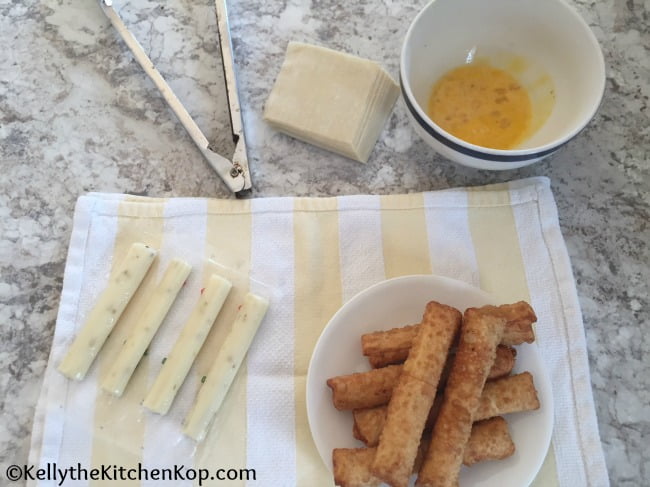