These homemade fudgsicles were very easy to make, and I thought they tasted like a delicious cross between chocolate ice cream and cheesecake.  However, my kids aren’t big cheesecake fans and I couldn’t get this by them.  Imagine my frustration when they wouldn’t eat a chocolate popsicle!  I thought for sure I had this one nailed and they’d never know it was good for them…  Waaa waaaa, they didn’t like the little bit of sour flavor (similar to cheesecake), so I was kicking myself for adding some whey.  You may want to make it without.

I put them in little Tupperware popsicle makers that I found on ebay.  (I’d rather not use something plastic but at least it’s cold, which makes me feel better.)  UPDATE: I've since found these BPA-free food grade silicone popsicle molds here.  They have great reviews for ease of clean up and popping out the popsicles.

This recipe is adapted from an article by Jen Allbritton in Wise Traditions.  Read more there about the health benefits of probiotic foods!

UPDATE: read the comments below – while these are still a pretty healthy frozen treat, sounds like they may not be much of a probiotic food after being frozen…….bummer!! 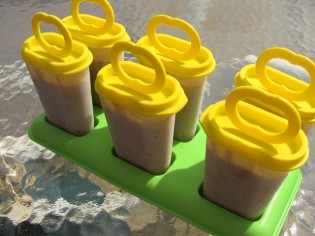 Make sure to check out my chocolate pudding fudgesicle recipe.

Mix together until smooth.  Pour into popsicle molds and freeze several hours.

Let me know what you think, dear readers.