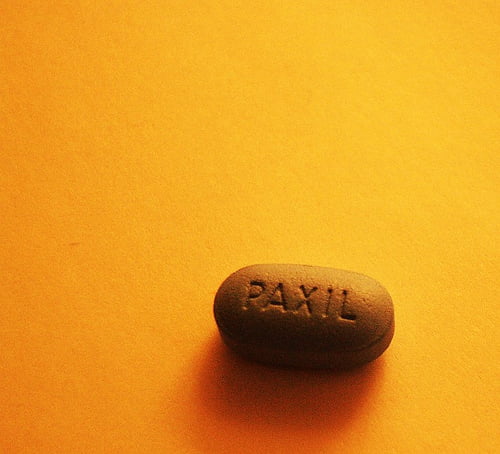 I recently heard from a reader who is struggling with weaning off Paxil.  (She shares her story about coming off antidepressants below.)  Years ago when this SSRI drug was originally prescribed for her, she was led to believe that it was non-habit-forming.

Most doctors are completely ignorant as to the withdrawal effects of Paroxetine (not that that ever stops them from prescribing these pills as if they were as harmless as Tic-Tacs). My doctor told me, “The great thing about Paxil is that you can stop taking it cold turkey.” It doesn’t get any more ignorant than that.” (Source)

Antidepressants such as SSRIs have some dependence producing effects, most notably a withdrawal syndrome. Their dependence producing properties (depending on the antidepressant) may not be as significant as other psychotropic drugs such as benzodiazepines, however, withdrawal symptoms nonetheless may be quite severe and even debilitating. SSRIs have little abuse potential, but discontinuation can produce disturbing withdrawal symptoms that may not be able to be distinguished from a reoccurrence of the original illness.[50] Since physical dependence is a reality, discontinuation should be discussed with a medical practitioner before beginning treatment with this class of drugs.  (Source)

A reader’s story about coming off antidepressants:

I started taking an SSRI (not Paxil) several years ago after going through counseling for anxiety. The counselor recommended that I might get through the rough patch I was experiencing by starting on an SSRI. After considerable deliberation, I decided it was the right thing for me to do at the time. I don't regret using an SSRI to get me through, but I do wish I had more information that would have helped me realize the reality of what I would face upon discontinuation.

I consulted my doctor the first time I decided to quit, and he instructed me to wean myself off it. I did this in the summer when I knew my life would be as stress-free as possible. After my last dosage, I experienced mood swings, irritability, and overwhelming anxiety that was much worse than what I felt when I decided to go on an SSRI in the first place. I felt as if I were broken and was horribly discouraged that without it I could never again feel the goodness that was in my life. Each summer for 4 more years, I tried to go off it and ended up back on it, beating myself up for not being able to love the wonderful life I had.

What was wrong with me that I couldn't get off this stuff?  Why was weaning off Paxil so difficult?

It wasn't until just this past winter that a girlfriend mentioned to me how difficult it had been for her husband when weaning off Paxil, when I did some research I found numerous examples of people who experienced minor and major withdrawal symptoms as they weaned themselves off of these drugs. As I read each testimonial I felt a flood of emotions. Every time I went off and felt worse, I thought I was broken. I never imagined these feelings were the result of the withdrawal process and didn't represent who I really could be.  This knowledge was a powerful catalyst for me. It gave me the strength to persevere through the withdrawal symptoms until my brain stopped craving the drug and returned to its own equilibrium.

I tell you my story hoping that it might help just one of your reader friends who is struggling or knows someone who is struggling with withdrawal. It took a huge amount of willpower and family support to resist starting up again, especially on days when my emotions were overwhelming me. But it can be done. Encourage your readers to be particularly mindful of their nutrition during this time, too. That has been an important part in my success.

I wanted to share this with all of you because I know a lot of people are on antidepressants these days and may not understand why they can't get off of it.

Should docs prescribe anti-anxiety meds so easily for every stressed out patient that walks through the door?

Depending on the situation I really do wish they weren't prescribed SO easily, and that more natural remedies were tried first.  Here are some options that come to mind (not that most docs even know about most of these ideas):

Two more added by the reader above…

Do you have more suggestions?  Have you tried weaning off Paxil or other antidepressants?  I hope you’ll share your experience in the comments to help others who may be struggling at this very moment.