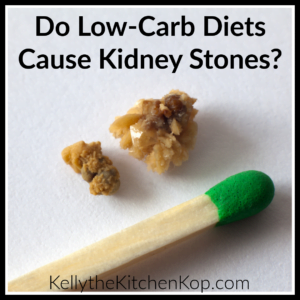 DO Low-Carb Diets Cause Kidney Stones?

Update:  Read about when I had kidney stones!!!

A friend called who is eating low-carb and was concerned because someone told her that she is basically asking for kidney stones.  She wants to know, “Is it true?  Do low-carb diets cause kidney stones?”

After some nosing around I found this article, Dangers of Zero-Carb Diets, IV: Kidney Stones.

Keep a few things in mind:

Update:  How I lost 22# even after menopause!

SO, having said all that, I was still concerned about that article, even if it was talking about ZERO carb diets, so I looked around more…

I found this from Dr. Berg:

He says that fasting or Keto diets COULD create kidney stones because when your body is in ketosis it does get rid of more calcium in the urine than usual, here's his video on how to prevent this!