Saturday was my Mom’s birthday, so I offered to make one of her favorite desserts: Lemon Torte. Now that I've looked closer at the box of Jello lemon pudding, I won’t be able to make that again. “Happy Birthday, Mom, enjoy all these rotten preservatives and artificial flavors!”

I actually made both a Lemon Torte and a Chocolate Torte, but for the chocolate I used a box of organic pudding. I’ll show you the differences in ingredients between the box of Jello lemon pudding and the box of organic chocolate pudding. Granted, homemade pudding would be even better, and hopefully someone will share a good recipe with us, but these are what I used this time. 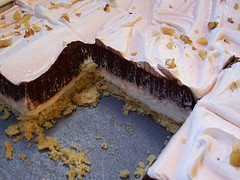 When you can't pronounce some of the ingredients, that's never a good sign.

Now look at the ingredients in the organic chocolate pudding:

That's more like it.  (Update:  homemade pudding is pretty easy, too, here's my homemade chocolate pudding and my homemade vanilla bean pudding.)

We’ve had this recipe in the family for years, but I’ve made some changes to get rid of some of the junky stuff. It consists of 4 layers of fun: a crust, a cream cheese layer, a pudding layer (you can make whichever flavor you’re feeling like that day – variations below), and a whipped cream layer on top.

Take a look at the recipe and I’ll show you ways I made it a little better, but still not ‘healthy' due to the sugar.

If you’re like me though, and you know you’re going to make something like this now and then to take when you go somewhere, my changes at least get rid of the high fructose corn syrup, preservatives, artificial colors, etc. And with the better ingredients I use, it adds a few healthier nutrients, like part whole wheat flour, crispy nuts, and the healthy fats in the butter, cream cheese, and real cream.

Mix all crust ingredients together and spread into a 9×13 glass or stainless steel baking dish. Bake at 375* for 15 minutes. Meanwhile, start working on the other layers…

Start the pudding, using about ½ c. less milk than it calls for, so it’s a bit thicker. If you don’t use the Jello junk (1 or 2 boxes of 3.4 oz. size/instant), then you’ll need to stand there and stir it for 15 minutes or so while it thickens. Yes, it’s a pain, but here's my secret: have your kids help! Give them a stool and let them sit there and stir. (Obviously, only do this if they’re old enough to safely be that close to the stove.) Once it's thick, set it in the frig to set up more until you’re ready to spread this layer on.

Make the whipped cream using 2 cups of cream. (Don't use icky “Cool Whip”.) NOTE: Be sure to read at that post how to make your whipped cream more “stabilized” so it works better in these type of recipes!  (However, you'll still want to serve this right away as it won't be AS stabilized as the fake stuff and may get a little runny later.)

When your crust is cool, start layering: