I love this recipe for kettle corn with coconut oil because it's just as tasty as caramel corn, but with less sugar, less mess, and it takes less time to make, but it's SO good with a nice blend of sweet and salty flavors.  (Still want some regular caramel corn?  Try this Better than Garretts Caramel Corn recipe.)

(Read here about the many benefits of getting more coconut into our diets, where to buy the best coconut oil, and where to find the popper I love.) 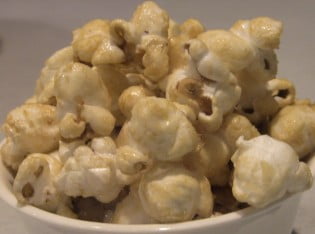 Put the coconut oil into your stove-top popcorn popper.  Now put in 3 kernels of popcorn and when those kernels pop you’ll know it’s hot enough – add the rest of the popcorn and immediately toss the sugar on top.  I used the 1/4 cup at first, but I now know that you can use only one tablespoon of sugar and it's still really good!  Stir continuously until all kernels are popped.  (Only takes a minute.)  Toss into a deep bowl so you have room to move it around good, sprinkle with sea salt, and shake it around some for a few minutes so it doesn’t all stick together.  Optional:  drizzle the melted butter and toss around for extra dreaminess.