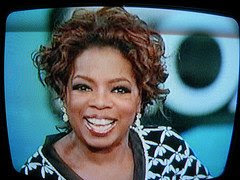 I'll tell you a little about what I heard on today's Oprah show titled, “How we treat the animals we eat“, and then I'm curious if you will end up wondering about the same glaring elephant in the room that I did…

Oprah started by explaining that this show was all about getting educated, so that we could make our own informed choices. I was surprised to hear her admit that it was only this past summer that she began wondering about where her food comes from. I suppose it's an understatement to say that the majority of the population still care much more about the cost of their food than about how it was raised or where it came from before it hit their table, but I'm still surprised each time I hear about it for some reason. (Probably just because it has become such a big part of my own little world.)

The main focus of the show was on the issue up for vote soon in California, Proposition 2, related to the humane treatment of farm animals. It would require bigger cages or pens so that the animals have much more room to move around.

The farmers on the show who were against this seemed, to me anyway, to be good and sincere people who genuinely believe that the way their farms operate is fine. They claim the animals are safer separated into cages instead of roaming free where they could hurt one another and possibly not get enough to eat. I still disagree with them, but felt more empathy for today's farmer who must make a living.

Why not the natural way?

However, their philosophy just doesn't make sense. Especially when you look at the farms featured on the show that were doing things the old fashioned, natural way. Not only were they making a living just fine, but also everything worked together to make a healthy, peaceful farm. Content animals don't go after each other. Their manure is a natural fertilizer to get the ground ready for next year's crop. The soil becomes healthier, the crop is healthier, and the animals are healthier. Surprise! God's way is still best.

Seeing pictures of the differences between a conventional chicken farm and a traditional chicken farm was unsettling. The traditional farm had the chickens out pecking around the farm for bugs and freely roaming for a good share of the day; the conventional farm showed a long, dark stinky hallway with chickens covered in feces and crammed into tiny cages – their average sized living space is 2/3's the size of a 8½ x 11 piece of paper. 90% of the eggs we (not me!) consume are from these farms, which are providing eggs at the cheapest possible price for the consumer. (Apparently we consume 75 billion eggs per year, and only 5% of us buy cage-free eggs – I found that number surprising! I thought more people read my blog! Ha ha) Keep in mind, they made it clear that the conventional farm featured on the show totally adheres to the USDA standards…

Again, the differences in the animals at the conventional farms compared to the traditional farms were staggering. The one looked so natural, and the other looked like a factory. Some of it was just downright terrible. They showed 2002 pictures of veal calves chained at the neck in 22″ wide crates for their entire lives of 16 weeks. Their diets were all liquid to keep them anemic (not sure why), which caused intestinal problems. Many had bad sores, others had pneumonia, and some couldn't even stand on their own. A guest on the show said this isn't an accurate representation of a typical farm, and that there are bad apples everywhere. I can appreciate this, but a typical conventional farm is still far from ideal. (Have you seen the Meatrix?) Then they showed a traditional farm in Wisconsin (“Strauss Veal”) and the farmers said the calves are always free roaming and with their mother at all times, drinking her milk. They receive no antibiotics or hormones.

Many companies are moving to support the farmers with animals on pasture:

ARE we willing to pay for it?

One of Oprah's guests commented that if the consumer wants the farmer to get away from conventional practices, they'd better be willing to pay for it. I don't think she is aware that more and more, people ARE willing to pay for better quality meat, eggs and milk. The point was made that the more there is a demand, the more prices will come down.

The elephant in the room that they all missed:

The only reference in the whole show related to the correlation between animals that were raised better and food quality was a stat: there are 20 times more cases of salmonella from conventional chicken farms than cage-free farms. But good health is so much more than that. The higher levels of omega 3's in animals on pasture, the CLA, the fact that healthy animals don't need medicines to keep them well, etc. (read more on all that at the links below) – all this translates to a vastly superior, more nutritious way to nourish our bodies compared to conventional animal foods. I can't believe no one brought that up on the show!

How can we vote?