Do you hate school projects as much as Kent and I do?  If you read this, Megan, we're sorry…

You see, our good friend, Meg, is our daughter's teacher this year.  There aren't many projects, really there aren't, but we just can't stand them.  We don't have self-motivating get-it-done-on-their-own kinds of kids.  These projects become ours, and it's time consuming!  (Later it's always fun to find out what grade we got, though.)

The latest project is a state report, and our 4th grader picked Colorado, which is good since we just went there last summer.  Part of the deal is that we have to come up with a recipe from that state and bring in samples to share.  After much Googling, I still didn't have a clue what Colorado was ‘known for', and decided to just think of something that would be easy to share on the big day.  I thought vanilla pudding sounded good, so I Googled ‘Vanilla Bean Colorado' and found out there's an organic vanilla bean company there.  BINGO.  It's a stretch, but whatever.  Plus Megan loves vanilla anything, so I knew that would seal the grade.  Ha!

Thankfully it turned out really good and it was a hit! 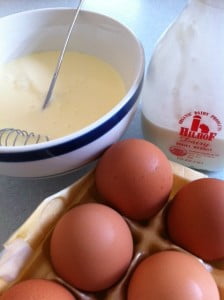 Also, for more homemade pudding ideas, check out the comments section at this pudding comparisons post.