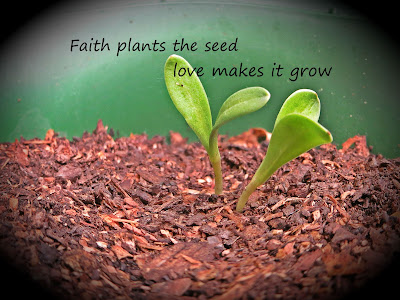 Today I'm sharing a guest post with you from Loriel, about another real food success story!  Do you have a story to share of someone in your family or someone you're close to who has had a major life improvement after just changing what they eat?  Please email me so I can post it and together we can help others!  [email protected]  Here's Loriel…

Many of us who have transitioned to a clean food diet (whether it be GAPS, Weston A. Price structured, Paleo/Primal etc.) can agree with at least one common thing. You usually feel great while eating clean food. All this feeling-goodness you're soaking up makes you want to hurry and tell your friends and family.

You tell them how great it is, how worth it is, how saturated fat really isn't what people demonize it to be…

But more often than not, your praising quickly goes in one ear and out the other.

Let's face it, the majority of people are not going to change their eating habits simply by what you say. Eating is a lifestyle. More often than not people are not willing to change their lifestyle despite all the great information you send their way. They need to either really want the change, to be sort of scared or snapped back into reality about all the dangers of conventional food or they need to see you lead by example (often it leads to curiosity and questions which is always a bonus and an invitation to give them the low-down).

Most importantly, someone needs to be open minded and willing to listen.

I want to share a story with you about a dear friend of mine and her success with changing her and her family's diet. I promise you want to hear it…

It all started in Clearwater, Florida during a sale we were holding at our dive shop…

A couple walked through the door who were interested in scuba diving classes and it was history from there! Jenn and I ended up becoming close friends and I consider her family mine.

Jenn's journey began when I printed out articles from the Healthy Home Economist– one about smart balance and one about slaying the sugar monster to give her to read. She read them but it was not enough to get her to take the step and make the change. Several months went by before anything happened and then…

The aha! moment came from 2 documentaries Rob watched Food, Inc and bugged Jenn to watch it. She told me she eventually watched it to “shut him up.” Rob told me he felt sick after watching what our food supply had come to.

When I watched Genetic Roulette (and made my husband watch it as well) I was astonished by how great of a documentary it was! Jeffrey Smith laid out everything so simply and so easy to understand I knew that I had to spread the word about it. One of the first people I went to was Jenn and Rob. I told them they needed to watch it and that it was going to rock. their. world.

A day later I received this text from Jenn–

Hey, that's what friends are for, right? 🙂

“That was the biggest taste difference for me… they were fantastic!”

Next, they brought in new and organic veggies–

“Our family has never been really into veggies.  I think you have heard the stories where we would sit down to dinner and Ri would look over at me and say, “Ok mommy, you try the veggie first!” (Ugh! Total mom fail!) But as much as I thought it was a texture thing, I am finding out that the organic products that we are buying taste completely different!  I actually like arugula. I am constantly learning how to cook different veggies in different ways.  I used to try to camouflage veggies in sauces because I didn't like the textures, but now that there aren't many additives there is no reason to do that.”

After the new veggies, Jenn and her family started to put their focus on meat products–

“It started with the “Greenwise” stuff at Publix, but we are slowly learning more about every process like grass fed vs. grass finished. And based on one of your blog posts, we reached out to a semi-local farmer down in Bradenton.  After ordering our first 1/8 of a cow, we took the kids to the actual farm! Where he would then show them hands on the food that they were going to eat.

And then it really started. The kids were and are loving this new lifestyle.”

Rob messaged me on Facebook saying they tried raw milk for the first time and bought 1.5 gallons of it. I asked if he liked it… and his response? “Loved it. We also bought grass-fed/grass-finished beef, and honey, straight from the hive.”

Nothing can explain the sense of happiness and fulfillment in my heart to see that my dear friends had taken that leap of faith, tried a new lifestyle and are reaping the benefits of it.

Not only that, Jenn has officially transitioned to becoming a label-Nazi as well (yay!)…

“Now we go through the store and read the ingredient lists. We try to stick with just the outside of the store and only buy stuff that is fresh and not laced with preservatives!“ 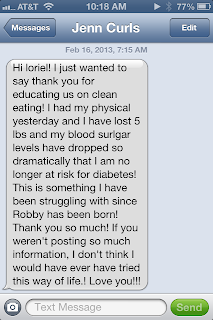 I can not express how proud I am of you both. I only planted the seed… You guys took that step and watered the seed and look where it took you guys! Riley and Robby are going to thank you tremendously in the future (if they have not already) and are going to be grateful for the changes you have made.

And Jenn, I am so proud of you.

To hear you are no longer at risk for diabetes makes my heart swell with joy. I knew you could do it and I have no doubt in my mind you will continue on this trend toward optimum health.

Since then Rob and Jenn have ordered 1/4 of a cow and are now looking into a local organic veggie co-op that will deliver produce to them from local farmers and only what is in season. Jenn has lost an additional 5lbs to date from incorporating some sort of exercise in her daily routine. She has said that her kids hardly ever ask for junk food and they get tummy aches (and the runs) from eating junk food when they're over at the grandparents.

This story proves that a clean, whole food diet will change your life around for the better.

It also proves it can be done in small baby steps and resulting in positive changes.

Sometimes it can feel like you are swimming an upstream battle and your words are worthless to people but I promise you, your efforts do not go unnoticed. The underlying truth is this: Keep doing what you do, believe in what you do and people will listen. It may not be at that very moment but the fruits of your hard work will blossom and before you know it, people will change one thing based on your recommendation and from there a domino affect will take place. Just do not ever give up.

This is how we change the world, one family at a time. 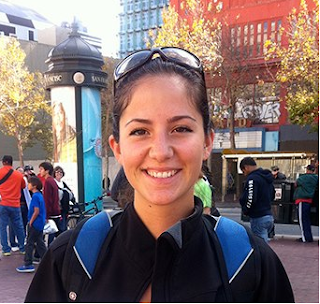 Hi, I'm Loriel. I'm an earth lover, food conscious, dream driven, peace seeker with a save the world attitude. I sacrifice many things in order to nourish my family with real food and hope to inspire whoever I come into contact with to make better food choices and to leave the world in a better place than when we arrived.

Please come take a look around at my blog, Healthy Roots, Happy Soul!