At the risk of putting out a post with the same recipe as 90,000 others are posting this week, I thought I'd share this easy traditional turkey stuffing recipe, which is from my Mom.

And she got it from another relative I believe, you know how that happens with great recipes. There just might be someone out there who wonders how to make it, or how to make it a more nutritious. We had it today and it actually wasn't for a turkey. Kent put a chicken in the oven, and we decided to make stuffing since we had a “bomb” loaf of bread to use up. (Yes, I had another bomb when trying a new recipe – I should've stuck to my original Bosch homemade bread recipe.) 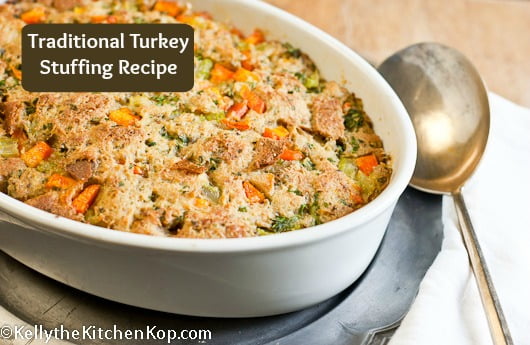 Traditional Turkey Stuffing Recipe (or is it “Turkey Dressing”?)

Make sure to look at the notes below for adjustments 🙂

Melt butter in a cast iron pan or a medium sized pot.  Add veggies and parsley, salt, pepper, and sage.

Sauté on medium heat until vegetables are soft, 10 minutes or so.

While that's cooking, break up a loaf of bread into cubes into a mixing bowl.

When veggies are done, pour all of that over the top of the bread and stir well.  Add a beaten egg if desired, for more nutrition & moisture.  Add enough broth to get it as moist as you like.  We like it moist but not wet.

Stir until it's all mixed in, then transfer to a buttered dish or stuff your bird once it's cleaned out well.

Bake 30-40 minutes on 350*, OR if you're stuffing a bird, it will take much longer, obviously, since it depends on the weight.  See below for more on that.